Latimer: Last weekend, I journeyed north – to the rugged and jagged cliffs of the county Antrim coast (Game of Throne’s country! :)).

It was the back of beyonds. Wow, I’m actually just going ‘damn, I should have gotten out and ran around or something!’ (over his shoulder on the left-hand side facing us! up there near the cove… yep :)!). I even took note of the place, thinking, I must remember this place!

Anyway, going to Antrim was a first for me. It’s not that far from home, nowhere in Ireland is in fairness, but sometimes it takes a few years before we end up going to the places that we’ve always meant to go.

I’ve always meant to go to the Giant’s causeway; it’s one of those ‘on the list, but never seem to go’ sort of places (like Sceilig Mhichíl, the tiny rock monastery out in the Atlantic ocean; but that’s another story!).

As we journeyed to the tip of Northern Ireland, I started thinking back on the story of the causeway, or what I remembered of it. In school I remember that we learned lots of the old Irish stories; children of Lir, Deirdre of the sorrows, Fionn and the Fianna (band of warriors) – I even remember learning about all the tests a young warrior had to do before he could join the Fianna; we had to draw a picture for each task and I think there were 12? I remember one of them was run through the forest while picking a torn out of your foot (and another task was to run through the forest without breaking a single twig!).

We learned a lot of Irish stories; we even did plays ‘as Gaeilge’ (in Irish). Children of Lir was a popular one (I played Fiachra? I think! In the act where the children are turned into swans… I play a child being turned into a swan very well, as it turns out! HA!).

The story of the causeway was a little fuzzy for me. The giant’s name was all I really remembered: Fionn Mac Cumhaill.

When we got to the causeway visitors centre, the story started to come back to me as I watched the CGI Fionn (known as ‘Finn Mac Cool’ in Northern Ireland, but ‘Fionn Mac Cumhaill’ in Irish) on the explanatory video they played.

This story, and the one that I remembered, was where Fionn was mocked by a Scottish giant who he could see beyond the sea in Scotland (jumping up and down and making gestures – the Scottish giant wanted a fight).

Fionn was enraged and threw stones into the sea to build a bridge to get to Scotland (one of the sods of earth became the Isle of Man – that’s a side-story!). He built the causeway, and traveled all the way to Scotland to confront this would-be foe.

Fionn crept along the final steps of the causeway. He started to haul himself up the Scottish cliffs then paused. The Scottish giant, Cuhullin, was far bigger than Fionn. So, like any sensible person (and giant!), Fionn fecked off back home and shut the door. As his wife stared at him, with a ‘what have you gone and done?’ look on her face, the ground beneath them started to tremble! BOOM, BOOM, BOOM! Cuhullin was racing across the causeway to fight Fionn!

Fionn’s wife, proving the clever one, told Fionn to get into their baby’s cot. She dressed him up as their baby and pulled the curtains to hide him from view.

Cuhullin banged on the door and she let him in. Fionn’s wife told Cuhullin that her husband was out. The giant pulled back the curtains and saw Fionn ‘the baby’ in his cot. What a massive baby, he thought, shaking in his boots – how big would his father be?! Fearing for his safety, Cuhullin raced back to Scotland.

I remembered the name Fionn Mac Cumhaill as also being ‘Fionn and the Fianna’, the story of an Irish warrior and the fearsome Fianna warriors. As it turns out this Fionn and the giant share the name, but the two have very different stories. 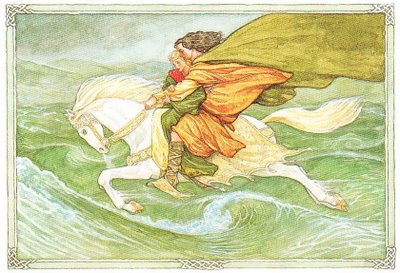 If you have ever heard the story of Tir na nÓg (the land of the young) and the young Oisín who journeyed there on a white horse with a girl called Niamh; well, Fionn Mac Cumhaill (of Fionn and the Fianna fame) was Oisín’s father.

The causeway was beautiful, despite the typical Irish bad weather (winds that would whistle right through your bones and icy cold rain!). The rocks were a little dangerous, because of the wet and the wind, but never one to care I scrambled across them and out as far as I could go – by law! The rocks of the causeway are made of basalt, which is solidified lava. It was caused, in reality, by a volcanic eruption.

Apparently at one point in its life (around 1901), it was rumoured that the causeway was going to be moved to a Philadelphia park (stone by stone and rebuilt there). Thankfully it wasn’t, but lots of the stones were taken away and can be found all over the world.

This box shows some of the places where you can find some of the Giants causeway! It’s very unlucky to remove stones and you are definitely not allowed anymore (my Mam kept saying; ‘wouldn’t you love some of those stones for your garden?’).

Back at the visitors centre we saw a collection of postcards from years ago, from people who visited the causeway (some would have been from the early 1900s). Very interesting to read voices from the past 🙂

We also saw some lovely jewellery made from buttons by a woman called Jane Walsh (Button Studio) in Athlone Ireland. I couldn’t leave without one!

We had another site to see while on the Antrim coast, the Carrack-a-Rede rope bridge. It’s a short rope bridge that leads over to an island where fishermen used to cast salmon nets (back in the old days they would cross the, then, one-rope bridge to collect their catch and haul it back over the nauseating cliff gap).

I really, really wanted to cross the bridge (even though I was afraid). But the winds were far too dangerous and the bridge was closed for the day. The sharp, icy winds would have swept you right off the bridge, so no good, we weren’t getting across. It was annoying, but being that close to the cliff, I felt pretty scared anyway. I kept saying I would have done it anyway, and I would have, but it looked really scary.

There were steel steps leading downward to the bridge itself at a very steep angle. If I have a fear of something, it is the sea. I really don’t like it. But heights aren’t great either, and it was high up over the waves crashing violently against the cliffs, so… I’ll put it back on the list for a later date!

We saw a lot of stunning views of the rugged coastline and also stopped by a small ‘village’ (I’m not sure it was a village exactly, maybe a small collection of private houses right on the coast more like?).

(I notice these pictures look like the place was warm… hmm, it was freezing and the wind would cut right through you!)

This was home to what is called (apparently) the smallest church in the world! It was basically in someone’s garden.

They had a gorgeous view of the sea and the loveliest little place to sit and watch the wave’s crash along the pebble-dash shore. It was very beautiful.

This was a great trip – the causeway, the bridge and the Antrim coast should definitely be on the list of places you have to visit if you ever come to Ireland 🙂

(also if you are interested in winning that kindle fire – the competition is still going on!)

8 thoughts on “Where Giant’s Roam”